One of our staff members will contact you asap. 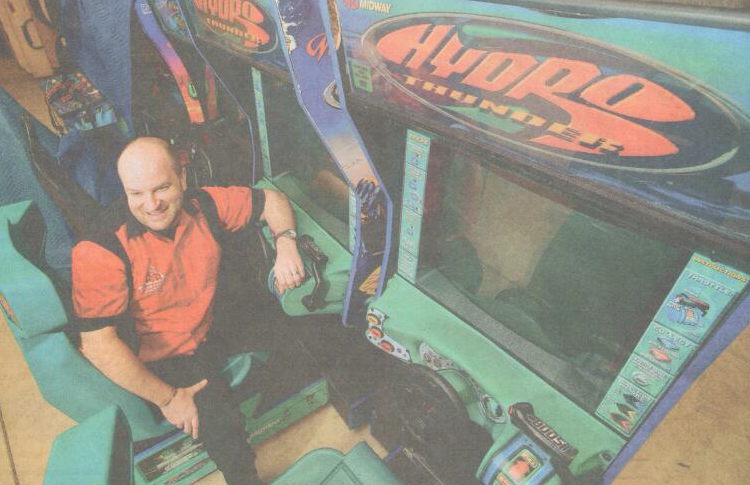 SPRINGFIELD – Travis Fryback started his business during one recession. He grew it during a second, worse recession. And, now that he has emerged from that recession, is again expanding and diversifying The Party Team.

Fryback, 39, was destined to be an entrepreneur. “Where other people see risks, I see opportunities,” he said.

Never mind that he had no knowledge or experience when it came to fixing up houses.

“How do you replace a toilet? I had no idea. How do you re-roof a house? I had no idea,” he said. “It was one of those things I decided I’d just have to figure out as I went along – I would have killed for YouTube back then.”

He faced a fairly steep learning curve, literally as well as figuratively. “This was in Aberdeen, Wash., where there’s like more rainfall than anywhere in the nation,” Fryback said. “All the roofs are super steeply pitched.”

When he began work on the roof, his father urged him to use a brake, a device to stop him from falling off the roof. The 17-year-old Fryback refused. “Brakes? I don’t need any stinking brakes,” he remembers thinking, moments before he slid off the roof.

“I landed in a Dumpster,” he said. “My dad loves to tell that story. It was a great I-told-you-so moment for him.”

Despite the occasional mishap, Fryback finished the house and sold it, roughly quadrupling his money, earning enough to pay for four years at the University of Oregon, where he earned a bachelor’s degree in business administration.

After graduation, “I kind of thought I’d get a regular job, a real job so to speak,” he said. But he was a round peg trying to fit into a series of square holes.

“I got fired from all kinds of jobs before I figured out that I wanted to be my own boss,” Fryback said. “If I didn’t get fired for something else, I was a bit of a know-it-all and I sometimes had bosses that didn’t appreciate it.

“I worked at a bank for awhile. I was an operations manager at a cycle sports shop. It was just not for me. I never felt comfortable. I never felt like I was reaching my potential. It was like there was some kind of ceiling I was never going to be able to break through.”

The closest he came to a job that worked for him was running the Oregon branch of Team Play USA, an Arizona-based company that put on team-building events for companies and organizations.

He had a certain amount of autonomy in the job. And it tapped into something he knew how to do, unlike home remodeling.

“I started planning parties when I was in high school,” Fryback said, “I was really good at it.”

The position suited him better than the jobs he had previously held. But then came the bursting of the dot.com bubble and?Sept. 11?terrorist attacks in 2001.

“The owner of the company had the foresight to see what was going to happen,” Fryback said. “He said, ‘Keep selling as much as you can, I’ll pay you a commission. But you’re going to need to find something else.’ ”

As businesses began cutting expenses for optional items like team building events, Fryback landed a job with a cycling store. But his cellphone continued to ring occasionally, with clients wanting to hold events. He referred them to his former employer or other companies.

Then one day he got a call from his contact at the Hilton Eugene. “This was in November 2001,” he said. “She said they had a client coming in late January, with 350 people, and they wanted a big event. They wanted something really fun. They wanted a casino night. Then she said, ‘You guys do casino nights, right?’ ”

Fryback had not only never done a casino night, he’d never even been to one.

“I was crushed,” he said. “I could see all those dollar signs in my head. I looked up at the ceiling and then I said, ‘Of course we do casino nights, it’s our specialty.’ ”

“I hung up and thought, ‘What do I do now?’ I didn’t know how to price them, what they cost, what you did.”

He began calling around to companies that put on casino nights, mumbling the name of a made-up business group, and asking for a quote. Once he had an idea of the going rate for an event, he began pulling together the props and products he needed.

He and his brother made what they could – “We went out in the garage and built a bunch of tables” – and bought what he couldn’t make, maxing out his credit card on items such as poker chips and felt for the tables. He hired friends to deal blackjack, offering them $50 apiece and beer afterwards.

He put the company on a more professional basis as it grew, and stopped relying solely on his buddies to put on events – “the beer bill had gotten pretty high.”

He assembled an army of mostly part-time workers, including retirees, students, and stay-at-home moms looking to make a little extra money.

Because his business is so seasonal, Fryback said, he can’t afford to keep more than about eight full-time employees for jobs such as maintaining and repairing casino equipment and props. His part-time employees earn about $13.50 an hour plus tips, averaging about $75 a night for a four-hour night, he said.

Demand for the parties picks up in the fall, peaks around the holidays and in the early months of the new year, then dies back down until graduation season, he said.

As the business has grown, he’s diversified, adding arcade games, a professional bingo set up, Pac-Man games, air hockey tables, pool tables, and boat and car race simulators. He also added photo booths and other equipment, such as sound systems, as well as props ranging from inflatable guitars and hats for the photo booths to seasonal or themed decorations.

All of the equipment is stored in a warehouse he built for the company behind his home in Springfield, where he also houses his fleet of trucks.

The business he started in one recession continued to grow, despite a second one, in part because he has carefully nurtured relationships with local and regional hotels, resorts and event centers, he said.

“I wanted to make sure that when they had a client (who wanted an event) they said, ‘Hey, call Travis, he does a great job,’ ” Fryback said.

And he hunted down new clients.

“In peak event months – December and January – I would drive around and stalk all the other parties,” he said, lurking outside ballrooms and conference rooms to see which companies were holding events there.

“You know how they always have an easel outside, with the name of the event on it? I’d call them a few weeks later,” he said.

He sees all his events as marketing tools, whether it’s dozens of casino tables plus arcade games, a DJ and photo booths or one table of blackjack in a private home. He barely breaks even on those small events, he said, but it gives his company exposure.

“I tell my dealers that every event we do is a trade show: you’re performing in front of all these people,” he said. Everyone attending is a potential source of new business, he said, taking word back to their own company, club or nonprofit organization about The Party Team.

He doesn’t gamble himself – “I can’t stand losing money so I don’t like gambling” – but, he said, his casino parties are more about entertainment than gambling, which is why he’s found professional card dealers don’t work well as employees for him.

“I tell them they have to smile, high-five people, do the wave, cheer them on. They just look at me,” Fryback said. But the real sticking point for the professionals, he said, is when he tells them that he wants them to help clients win. “Let’s put it this way,” he tells the dealers, “No one loses five games in a row at one of our parties.”

Today, his client roster reads like a membership directory of local and national businesses, from the Hilton Eugene to Whole Foods and Google, as well as noprofits that have used The Party Team at their fundraisers.

But to keep the company growing, Fryback said, it has to continue to evolve, which means coming up with new ideas and events, and finding new niche markets.

The customer who loved his casino party last year will be back, but that customer is going to want something new this time, he said.

He recently added to the company’s original name, now calling it The Party Team Parties & Music to reflect its increasingly broad focus, which includes DJs and karaoke nights, arcade rentals, derby parties with video horse racing and his latest venture, The Wedding Team, under the direction of the aptly named Fallon Love.

He has also expanded geographically, opening offices in Portland, Boise, Bend and Seattle, and been recognized by both national and international event associations.

As the business grew, he learned to delegate, carving out time for his family: wife Mindy and sons Cyrus, 20; Cooper, 8, and Chase, 5, and community ventures that matter to him. Education opened doors for him, he said, which is why he serves on the board of the Springfield Education Foundation.

He helped take the foundation from a $70,000-per-year organization to a $235,000 one, Executive Director Ronnel Curry said.

After making it through the recession, the future is looking bright for The Party Team, Fryback said, although he takes nothing for granted when it comes to business.

Still, he is confident enough to indulge in an occasional I-told-you-so moment of his own. His mother, a semi-retired accountant, keeps his books for him now. And Fryback never tires of reminding her: “See, I told you I was better at partying than any of the other kids.’ ” 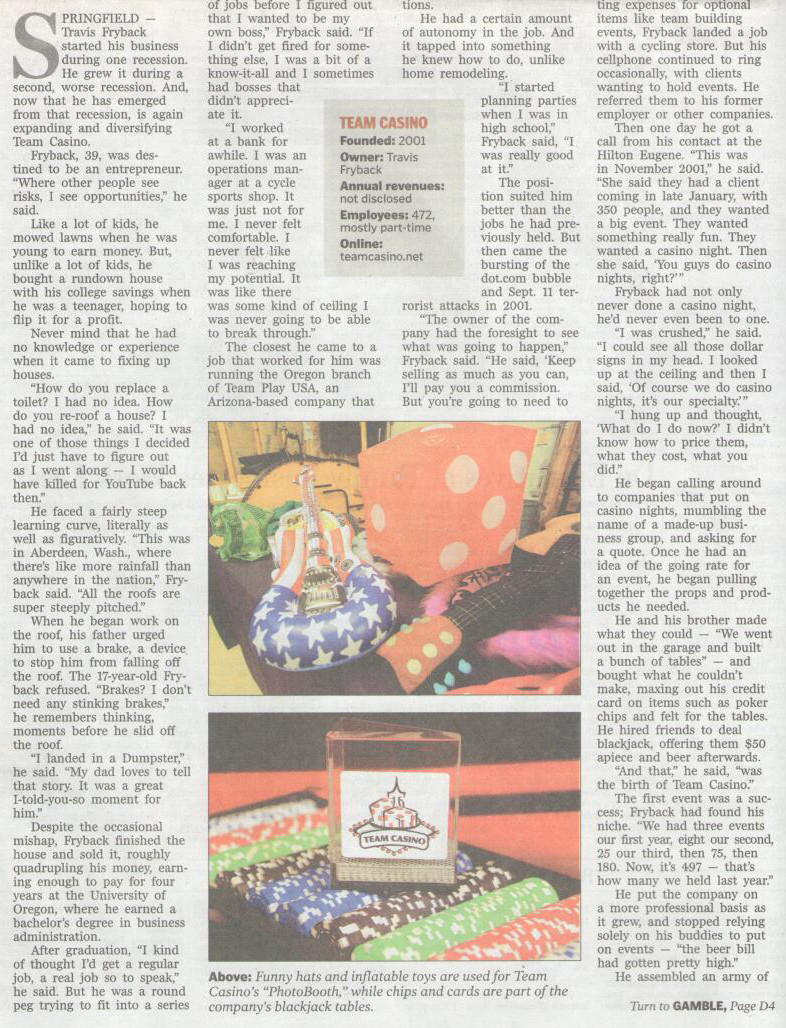