1.No Disclosure, No Advice, One Player to a Hand 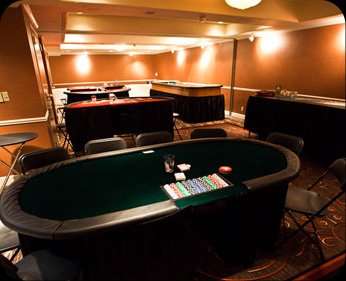 Players are obligated to protect the other players in the tournament at all times. Therefore, players, whether in the hand or not, may not:
a.Disclose contents of live or folded hands
b.Advise or criticize play before the action is complete
c.Read a hand that hasn’t been tabled

Repeated etiquette violations will result in penalties. Examples include unnecessarily touching other players cards or chips, delay of the game, and excessive chatter. Players are required to act in turn.

Floor people are to consider fairness & the best interest of the game when making decisions. Unusual Circumstances can occasionally dictate that decisions in the interest of fairness take priority over technical rules. THE FLOOR PERSON’S DECISION IS FINAL.

A. a.In flop games when balancing tables, player will be moved from the big blind to the worst position (which is never the small blind). The table from which a player is moved will be as specified by a predetermined procedure. Play will halt on any table that is three or more players short.
B. Players going from a broken table to fill in seats assume the rights and responsibilities of the position. They can get the big blind, the small blind, or the button. The only place they cannot get a hand is between the small blind and the button.

A Penalty MAY be invoked if a player exposes any card with action pending, throws a card off the table, violates the one-player-to-a-hand rule, or similar incidents take place. Penalties WILL be invoked in cases of soft play, abuse, or disruptive behavior. Penalties available to the TD include verbal warnings & “missed hand” penalties. A missed hand penalty will be assessed as follows: The offender will miss one hand for every player (including the offender) who is at the table when the penalty is given, multiplied by the number of rounds specified in the penalty. Tournament staff can asses 1,2,3 or 4 round penalties. A player that is disqualified shall have his or her chips removed from play. Repeat infractions are subject to escalating penalties.

A. Break time will begin when announced by the TD. Tables may finish the current hand, and then players will be on break for the remaining time left on the clock. The TD will announce the end of the break. Play will resume regardless of number of players in their seats.
B. Dealers will remain with the tables during the breaks to guard chips and color-up if required. Dealer breaks will be prescribed by the house.

5. Blind Structure and Payouts subject to change based on Participation

Unless otherwise noted in published material for a specific tournament, payouts for a poker tournament are paid in pre-paid credit cards. These credit cards can not be redeemed for cash, but can be spent at any vendor that accepts credit cards for payment. 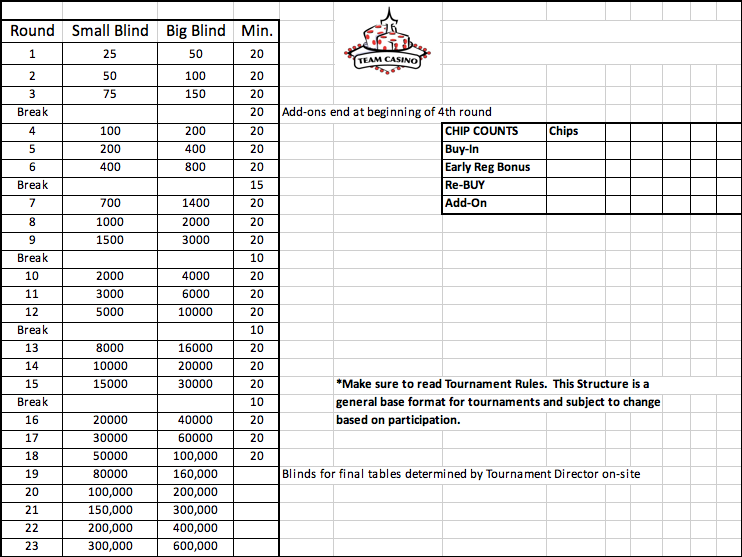